Separating the wheat from the chaff
With millions of websites available to Internet users, it can be hard to tell which ones are legitimate. For every article on a topic that comes from a legitimate news source, there are many more articles on that same topic that are illegitimate. Sharing fake news too often can damage your online reputation, credibility, and negatively affect your academic standing. While studying at Aberystwyth University, it is important to be aware of fake news articles and how to use legitimate articles and sources correctly. This blog post will give you some useful tips on how to achieve both goals which will make your academic journey just that little bit easier. We will go over the basics of fake news, learn how to spot it, and what to do if we encounter it.

What is ‘fake news?’
There are many definitions of fake news but the most widely accepted definition is any news story that is factually incorrect or deliberately misleading. The main purposes of fake news are generating a reaction, pushing a political narrative, or for humorous purposes. It is easy to produce this kind of news on the Internet as anyone can publish anything they want regardless of its truthfulness or their individual qualifications. It is also becoming increasingly difficult to detect as it is easy to disguise a website as a legitimate news source and the rise in technology is making it easier to make other forms of news, such as live reports, appear legitimate.

How to tell the difference between fake news and legitimate (‘real’) news?
One of the first things you should look out for when reading an article online is the website that it comes from. Virtually all legitimate news sources, such as the BBC and The Guardian, have a closed padlock next to the website link in the address bar. This symbol means that the website is secure and has a valid web certificate.

Some user-created websites, or websites that have not received a valid web certificate will contain an unlocked padlock symbol with a red line through it – indicating that the web connection is not secure. This method is an effective way to tell if a website is hosting fake news, however, it is not fool proof. Many amateur news websites, especially those run from home, may produce legitimate news but are unable to obtain a valid web certificate. If you are unsure if an article is real or not, look at how it is presented. One of the main reasons fake news is produced is to garner a lot of clicks by attracting outrage. For example, a story titled ‘Prince William steals £500 million from the FA’ is deliberately inflammatory and designed to get a reaction out of the person reading it. Headlines such as these are usually accompanied by an edited image created to make the article more believable. A good rule of thumb is that if a story sounds too outrageous to be true then it most likely is. Another method of verification is seeing if other news outlets are covering the story. A headline titled ‘Prince William Steals £500 million from the FA’ would be on the front page of every national news outlet imaginable so a simple Google search should bring up other reports. The best way to verify the legitimacy of a story is to see if at least 3 different, trusted news sources are covering the story. If your search does not turn up multiple results from legitimate news outlets, it is more than likely that the story is made up.

Rise of The Machines: Combating social media ‘bots’
While reading this blog post you may have asked yourself ‘who is responsible for the spread of fake news?’ While human beings are typically responsible for producing the article, the article itself is normally shared and spread through social media by a bot. Bots are computer programs which are designed to perform a certain function on social media, such as subscribing to a YouTube channel. Bots take the form of a social media account, and it can be hard to tell which accounts are real and which are fake. Fortunately, there are a few ways to tell. If you suspect an account is a bot, watch what they do on social media. Bots tend to post often, with their posts being similar in word choice and sentence structure. Some bot accounts even feature profile pictures known as deepfaces, which are AI-generated faces designed to disguise a social media profile as a real person. The best way to spot a bot using a deepface is to search for the image online by right-clicking on the profile picture and clicking search. If the result only generates profiles that only have one photo online, then there is a good chance it’s a bot. If you suspect an account is a bot, the best thing you can do is report the account to the social media platform the account is on and then block the account. Most social media websites, such as Facebook and Twitter, remove bot accounts if they receive enough reports. Alternatively, websites such as botsentinel.com utilize machine learning to determine if an account is a bot OR is a person engaging in toxic behaviour such as starting fights online and spreading fake news.

‘Deepfake’ media
Technology is now so sophisticated that it is possible for AI to make it seem like a person said or did something that they never did. This is what is known as a deepfake, where an AI generates a composition of a person’s face which can be superimposed over another person’s face, creating the illusion that the person is truly there. Hackers can also use deepfake audio which uses AI to create a replica of a person’s voice or other sounds. Oftentimes, these technologies are used to make a person appear somewhere they have never been to and saying something they have never said. For example, it is now possible to make it appear as if Donald Trump spoke to people at a conference and said something that he never said. Because of how lifelike the AI-generated composites are it can be incredibly difficult to spot, and the technology behind it is only becoming more advanced, so what can we do? To spot a ‘deepfake’, pay close attention to the subject’s facial movements. Does anything look stiff or unnatural? Now listen to their voice, how does it sound? If something sounds off, such as the tone of the speaker, their speaking volume, or their voice sounds distorted then it is possible that you are watching ‘deepfake’ footage.

LibGuides
If you’ve made it this far then you might be thinking that ‘this is an awful lot to remember’. Don’t worry, there are resources to help you! The Subject Librarians have produced LibGuides, which provide information on how to access a wide variety of library services, such as finding expert resources on your subject, getting in touch with a subject librarian, and even guides on how to use library resources. LibGuides also contain concise guides on referencing and avoiding plagiarism which we recommend all students read. The first guide I recommend provides some useful information on finding and managing information for your dissertation. LibGuides also has a section on evaluating news and media sources which is useful for spotting fake news.

Your responsibilities and how you can help
You might be wondering what the spread of fake news has to do with you. After all, not all of you are studying journalism or communications, so why bother combating the spread? Most social media websites have a zero-tolerance policy for sharing fake news stories with the punishment for doing so being the permanent suspension of your account. Furthermore, sharing fake news can also affect your employability since it shows a lack of awareness and can be seen as damaging to the company’s reputation. Factors like these are why it is critical to remain diligent when sharing news stories on the internet. You can combat the rampant spread of misinformation by using some of the previously mentioned methods. Another way to help is to spread the word about fake news. Tell your friends, your family, make as many people aware of fake news as you can.

In Part 2 of this blog post series, we will be discussing plagiarism and what you can do to avoid misusing the works of others (or yourself!)

Welcome to our WordPress site! 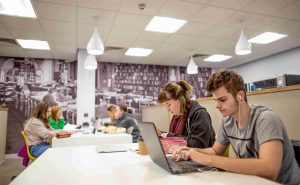