Well it’s been a fairly boring Sunday so far (with the notable exception of some truly biblical rain and thunder) and as I am mere hours from bedtime, I don’t expect it to hot up too dramatically. That having been said, it is also the end to my second week here in Bordeaux. If this were truly the holiday it feels like I would now be packing up my sundresses and swimwear and heading to the airport to return to a dreary England. However this is no ordinary trip and I still have 11 weeks left!!

This fact is to me simultaneously thrilling and daunting as I know so many challenges are left to be overcome:the actual work for example! But as I have already said, I am head over heels for Bordeaux and find myself loving the culture a little more each day. This weekend was the hotly anticipated Bordeaux Fête le Vin and, despite some extreme weather which resulted in the whole thing being locked down at 8pm last night due to high winds, it didn’t disappoint. I am not ashamed to admit that as a 20 year old student from the Midlands, I have very little knowledge of wine; I just know that it is made from grapes, there are different colours and types and some are nicer than others. Because of this it was nice to get the opportunity to actually try some nice wines rather than Echo Falls (couldn’t find that anywhere :P) and it was also an excuse to look cultured while steadily getting plastered.

Now, I always like a good glass of wine but my friends and family-or anyone who has ever met me really-will tell you that it’s French food which really does it for me. In my opinion there is no nation better at providing quality, delicious grub and if pushed I would say that Aquitaine was the best region in terms of indulgence. At the Fête le Vin there were wine producers aplenty but also numerous Artisan food producers too who were there to show off what the region has to offer. At a glance there were oysters from the Bassins and foie gras and all things duck from Dordogne, you could get Gato Bask from the Basque Country and Charcuterie like you’ve never seen before; saucissons and jambon cru, in a baguette or just a cone as a perfect nibble alongside some delicious wine. There were so many different ice-creams I could barely control myself and, of course, there were fresh crêpes with Nutella. The highlight for me was a truly delicious Sandwich aux Aiguilletes du Canard with confit onions. In essence it was a glorified duck steak baguette but in true French style the duck was beautifully pink and the baguette had a crust strong enough to break teeth: it was fantastic!

In other non-food related news I also visited the Musée d’Aquitaine which was free (yay!) and surprisingly interesting. The exhibit we saw focussed on the evolution of civilisation from Neanderthal to the Roman Empire. Me and a few other stagiaires spent a couple of hours wandering around the exhibits, sniggering at the minuscule manhoods of some of the Roman sculptures (we’re in our 20s, it’s shameful really) and being impressed by how lethal the spears looked. As I am damn near incapable of leaving an establishment without getting some kind of nourishment, we all had a smoothie in the museum cafe. I counted 8 whole carrots going into mine and I’m not going to lie, it made me feel better about all the wine. The late nights though, that is a different thing entirely (or not, there is also food involved). On Thursday, a couple of stagiaires received their final year results and we took the opportunity to ‘take’ Bordeaux. The night started out with hands down one of the best meals I have ever had at a restaurant called l’Entrecôte. There is only one option for starter and main course; a green salad then steak and chips. But don’t be fooled this is no ordinary steak-frites, this is the most succulent, tasty, cooked-to-perfection piece of faux fillet with a to die for garlic and mushroom olive oil sauce and hand made chips which are just the right amount of crispy and gorgeously squishy. And what’s more the chips (and the fresh baked bread for that matter) are ’à volonté’ meaning they are all you can eat so if you wish you can keep stuffing it in til you really can’t move. As if that’s not enough there is a dessert list but if you’re thinking “I can probably manage a little something for afters” perhaps you should think again as the dessert servings are huge! I ordered a creme caramel which could easily have fed 3 and the different desserts around the table told a similar story. 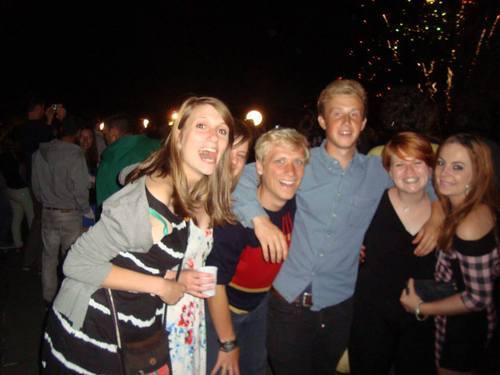 Anyway after staggering out of l’Entrecôte, we headed to the Miroir d’Eau to watch the fireworks and light show which signaled the start of the Fête le Vin. They were of course amazing and were made even more enjoyable by a beer and lovely company. When relative calm had once again befallen the city, we made out way to a nightclub called La Plage which was colossal, and expensive so it was shots, mainly of tequila, from here on out. There was much dancing and singing and basically larking about but by half 4 it was time to call it a night and we made our way back to the tram stop to wait for the first tram home at half 5am. Needless to say it was actually light when I got home and also surprisingly bloody freezing so I crawled into bed hoping to sleep for at least 1000 years but alas, I was awoken a mere 3 hours later when my host mum went to work.

If I’m honest I’m still making up the sleep 3 days later but hey, you live, you learn and tomorrow my last week of language school starts before I am released into the world of work and have to actually look after other people’s kids. God help us all!

See You In The Next Blog!